Skip to content
Home » Blog » Criminal Law » Will I be deported if I picked up a criminal case and I am not an American citizen? 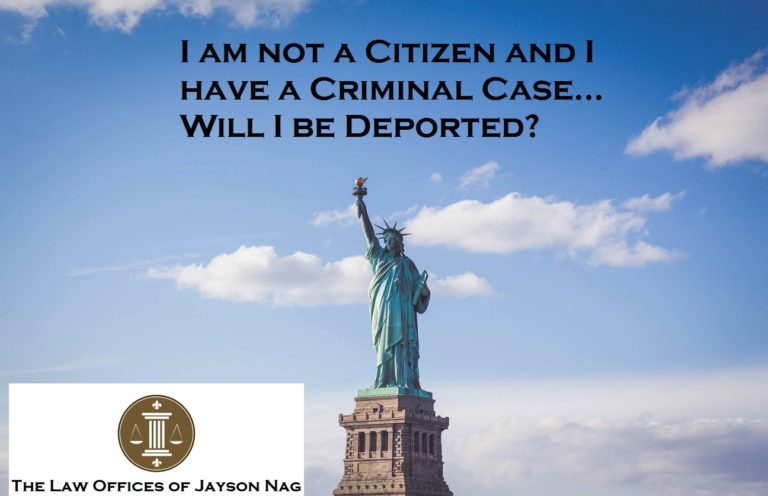 Deportation of a Criminal Alien

Deportation is perhaps one of the most severe consequences of committing a crime that a criminal alien could face. The effects that deportation can have not only on the individual, but also on that individual’s family are significant. That is why at the Law Offices of Jayson Nag, we are committed to helping you understand exactly what the consequences of a criminal conviction are if you are illegal and what options you might have moving forward.

Will I be deported if I am illegal and criminally convicted in Texas?

While there is no bright line law to answer this question, the short answer is possibly. There are several common circumstances in which an alien risks the chance of being deported, which are (it is important to note that the below list is not exhaustive as to what makes an alien deportable):

Types of Crimes which make an Alien Deportable

The most common types of crimes which make an alien deportable in Texas are crimes falling into the category of a crime of “moral turpitude”. There are no specific statutes at the state or federal level which list exactly what crimes are considered crimes of moral turpitude, but rather these judgments are made on a case-by-case basis and settled through past legal cases.  The easiest way to think of a crime of moral turpitude is to categorize it as a crime which gravely violates the accepted standard of the community. What does that mean? Think of theft, for example – a crime commonly considered to be one of moral turpitude. As a society, American citizens value the ability to legally possess their own property to the exclusion of all others. When an individual illegally takes another’s property either by deceit or force, such an act is considered to egregiously violate the accepted standard of legal possession in the community. Therefore, theft is a crime of moral turpitude that will make an alien deportable if convicted in a court of law.

Now that you hopefully have a better feel for the types of crimes which will make an alien deportable, let’s turn the focus to regulation and legislation regarding deportation, and how the new Trump administration will likely effect the amount of individuals who fall under the status of “deportable”.

At the Law Offices of Jayson Nag, we not only want you to understand when a criminal alien could face deportation; we also want to ensure that you understand the changes in legislation and regulation that will have a critical impact on alien residents in the near future. The United States Immigration and Customs Enforcement (“ICE”) is a regulatory agency within the Department of Homeland Security that was originally created in response to the terrorist attacks on September 11, 2001. ICE is charged with the responsibility of detaining, arresting, and potentially removing any aliens – particularly those on considered a priority under the Immigration and Nationality Act (“INA”). Under the Obama administration, former Secretary of Homeland Security Jeh Johnson had adopted a set of priorities which ICE was to abide by in executing its duty to protect the nation from illegal aliens. Former Secretary Johnson’s top three priorities for ICE were:

In other words, if you were a criminal alien that fell into any of these three categories, ICE considered you a priority and would therefore take action to ensure your removal from the United States. As you can see from the list above, Obama’s administration put heavy emphasis on felony crimes and clearly distinguished a felony criminal alien from a criminal alien convicted of a lesser offense (such as a misdemeanor). The purpose of such a distinction was to narrow the amount of aliens that fell into the “criminal alien” category, thus making the number of criminal aliens appearing as a priority on the removal list enforced by ICE much smaller. However, now that President Trump has been elected, there will likely be amendments made to the INA that will have significant impacts on the amount of aliens that will be considered deportable.

It is important to note that under this new section of priorities instituted by the Trump administration, there is no longer a distinction between felonies and misdemeanors; even aliens not yet criminally charged are now subject to being placed on the deportation list. This means that ICE has now will have a wide latitude to enforce their own preferences on who they consider a criminal alien and will thus be subject to removal.

What the Trump Administration means for Criminal Aliens

The Trump administration has broadened the scope of aliens that qualify as “criminal aliens” under the INA, allowing for just about any alien who has committed an act that could constitute a criminal offense to be deemed a criminal alien. Further, once deemed a criminal alien by the Department of Homeland Security, you are immediately subject to deportation. While this might seem drastic and worrisome, it is important to remember that even as an illegal citizen, you are still afforded certain rights provided the United States Constitution, such as the Fifth and Sixth Amendment rights of due process, trial by jury, etc. Although an immigration proceeding differs from that of a criminal trial, it is still an opportunity to be heard, and thus you should ensure that you understand your options as a criminal alien.

Consult the Law Offices of Jayson Nag at (817) 900-2823 to find out more about the rights and risks for criminal aliens in Texas or to learn more about deportation.